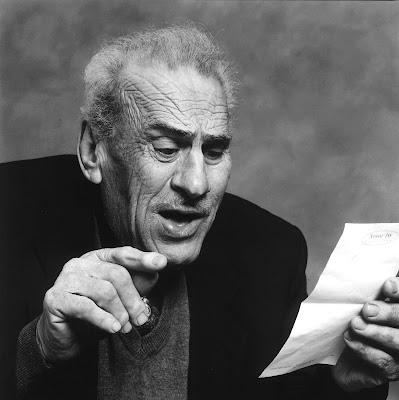 We are very sad to report the death of the Palestinian poet Taha Muhammad Ali. He died in Nazareth on Sunday (2nd October). His translator Peter Cole writes: 'As all who encountered the man and his work know, Taha’s imagination was expansive, and several years back he had, as it happens, already conjured his final hours as he’d liked them to have been…'

If, over this world, there’s a ruler
who holds in his hand bestowal and seizure,
at whose command seeds are sewn,
as with his will the harvest ripens,
I turn in prayer, asking him
to decree for the hour of my demise,
when my days draw to an end,
that I’ll be sitting and taking a sip
of weak tea with a little sugar
from my favorite glass
in the gentlest shade of the late afternoon
during the summer.
And if not tea and afternoon,
then let it be the hour
of my sweet sleep just after dawn.

And may my compensation be —
if in fact I see compensation —
I who during my time in this world
didn’t split open an ant’s belly,
and never deprived an orphan of money,
didn’t cheat on measures of oil
or violate a swallow’s veil;
who always lit a lamp
at the shrine of our lord, Shihab a-Din,
on Friday evenings,
and never sought to beat my friends
or neighbors at games,
or even those I simply knew;
I who stole neither wheat nor grain
and did not pilfer tools
would ask —
that now, for me, it be ordained
that once a month,
or every other,
I be allowed to see
the one my vision has been denied —
since that day I parted
from her when we were young.

But as for the pleasures of the world to come,
all I’ll ask
of them will be —
the bliss of sleep, and tea.


In this video Taha Muhammad Ali reads his poem 'Abd el-Hadi Fights a Superpower' in Arabic and then Peter Cole reads his English translation, from So What: New & Selected Poems 1971-2005. Pamela Robertson-Pearce filmed Taha with Peter Cole when he visited Aldeburgh Poetry Festival in November 2007. This film is from the DVD-book In Person: 30 Poets filmed by Pamela Robertson-Pearce, edited by Neil Astley (Bloodaxe Books, 2008), which includes four poems from So What read by Taha Muhammad Ali with Peter Cole.

In his life
he neither wrote nor read.
In his life he
didn’t cut down a single tree,
didn’t slit the throat
of a single calf.
In his life he did not speak
of the New York Times
behind its back,
didn’t raise
his voice to a soul
except in his saying:
“Come in, please,
by God, you can’t refuse.”

Nevertheless —
his case is hopeless,
his situation
desperate.
His God-given rights are a grain of salt
tossed into the sea.
Ladies and gentlemen of the jury:
about his enemies
my client knows not a thing.

And I can assure you,
were he to encounter
the entire crew
of the aircraft carrier Enterprise,
he’d serve them eggs
sunny-side up,
and labneh
fresh from the bag. 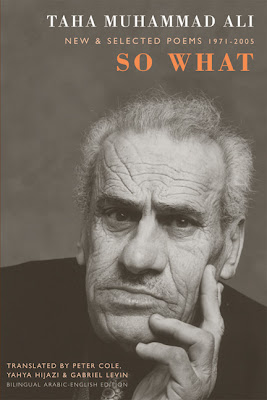 Taha Muhammad Ali (1931-2011) was a much celebrated Palestinian poet whose work is driven by a storyteller’s vivid imagination, disarming humour and unflinching honesty. Born in rural Galilee, Muhammad Ali was left without a home when his village was destroyed during the Arab-Israeli war of 1948. Out of this history of shared loss and survival, he created art of the first order. His poems portray experiences ranging from catastrophe to splendour, all the while preserving an essential human dignity.

He was born in 1931 in the village of Saffuriyya, Galilee. At 17 he ﬂed to Lebanon with his family after the village came under heavy bombardment during the Arab-Israeli war of 1948. A year later they slipped back across the border and settled in Nazareth, where he lived until his death in 2011. An autodidact, he owned a souvenir shop now run by his sons near Nazareth’s Church of the Annunciation. He published several collections of poetry and one volume of short stories. So What: New & Selected Poems 1971-2005 (Copper Canyon Press, USA, 2006; Bloodaxe Books, UK, 2007).

In his introduction to So What, Gabriel Levin writes: ‘Muhammad Ali writes a literary Arabic that occasionally incorporates or, as he puts it, “grafts” onto the classical forms certain elements of a quasi-colloquial and often idiosyncratic Arabic, along with – in some instances – full-ﬂedged dialect when his characters speak. In contrast to the stylised, heightened diction of most of his contemporaries, Muhammad Ali’s lower register anchors the poetry to a sense of place without ever sounding merely like dialect. […] Arabic poets and critics have pointed out that Muhammad Ali’s originality (and even his relevance to the Palestinian cause) lies precisely in his blending of registers and employment of natural, homespun imagery – both of which contribute to the poetry’s apparent simplicity while belying all along its complex sensibility. Saffuriyya may have been razed to the ground, but its mores, language, and landscape remain paradigms of durable hope in the poet’s imagination. In effect the rhetoric and technique of Muhammad Ali’s poetry constitute yet another means of clinging to his home and land, and of being a samid – a term coined by Palestinians in the late 70s and meaning one who holds on tenaciously to his land and its culture and perseveres in adverse times.’

The Bloodaxe UK edition of So What was a Poetry Book Society Recommended Translation, and was launched in November 2007 at Aldeburgh Poetry Festival. Adina Hoffman's acclaimed biography of Taha Muhammad Ali, My Happiness Bears No Relation to Happiness: A Poet’s Life in the Palestinian Century (Yale University Press, 2009), won the 2010 Jewish Quarterly Wingate Prize.

In Israel, in the West Bank and Gaza, and in Europe and in America, audiences were powerfully moved by Taha Muhammad Ali’s poems of political complexity and humanity. Aldeburgh Poetry Festival director Naomi Jaffa last saw him when he gave his only UK reading in 2007: 'I knew he was extremely frail, now, and obviously a considerable age - but I'm extremely sad to know that Taha is gone. He - together with Peter Cole - was an absolute sensation at Aldeburgh - the only standing ovation, with people weeping, I've ever experienced at the Festival. And they were the same at the Dodge Poetry Festival in 2002 - where I encountered Taha and his poems. What a man. What a loss.'


Review comments on So What

‘Taha Muhammad Ali speaks with an emotional forthrightness and unflinching honesty that at times reminds me of the Turkish poet Nazim Hikmet, at times of Israeli poet Yehuda Amichai. He writes in a literary Arabic grounded in the vernacular and rooted in local custom… He has developed a style that seems both ancient and new, deceptively simply and movingly direct’– Edward Hirsch, Washington Post

‘In Muhammad Ali’s world, what appears to be placid can suddenly become disconcerting… He is a beguiling storyteller who maintains a tone of credibility and lucidity without diluting the mysterious or distressing aspects of his tale. By avoiding commonplace response to everyday experience [he] has written poems that are fragile and graceful and fresh’ – John Palatella, The Nation

‘Taha Muhammad Ali’s patient, insistent and often beautiful iterations of who he is and what is what are as compelling and evocative as the faces and places that any reader has himself or herself loved…the poet’s vision of experience is equally applicable to Arabs and Jews, kings and paupers, the quarter of the world’s population that is Chinese, and the other threequarters as well’ – Ha’aretz (Israel)

‘The translation from the Arabic is excellent, and the introduction is masterly’ – Issa Boullata, World Literature Today