Luljeta Lleshanaku reads four poems: 'Marked' (in both English and Albanian), 'The Mystery of Prayers', 'Monday in Seven Days' (parts 5 and 9) and 'Memory', all from Haywire: New & Selected Poems. Neil Astley filmed Luljeta Lleshanaku at Rathfarnham, Dublin, in March 2010, when she visited Ireland to read at DLR Poetry Now in Dún Laoghaire.

POEMS READ ON THE VIDEO:

My deskmate in elementary school
had blue nails, blue lips, and a big irreparable hole in his heart.
He was marked by death. He was invisible.
He used to sit on a stone
guarding our coats
as we played in the playground, that alchemy of sweat and dust.

The one marked to be king
is cold, ready for a free fall
born prematurely from a sad womb.

And the redheaded woman waiting for her drunk husband to return
will go on waiting for one hundred years.
It isn’t the alcohol; she is marked by ‘waiting.’
And he only as guilty as an onlooker
pushed indoors by rain.

What’s more, it isn’t the war
that took the life of the young boy
with melancholy eyes. He was marked as well, born to be on the
recruiter's list.
Melancholy is the standard arsenal of war.

And then there is one marked for survival
who will continue to eat his offspring like a polar bear
that never notices the warming climate.

All of them are as closed as theorems, their sky
a rental home
where hammering even a single nail of change is forbidden.

They are waiting for their next command, which they will ignore
anyway
like the Argonauts who ﬁlled their ears with wax
and rowed on through the sirens’ path.


The Mystery of Prayers

In my family
prayers were said secretly,
softly, murmured through sore noses
beneath blankets,
a sigh before and a sigh after
thin and sterile as a bandage.

Outside the house
there was only a ladder to climb
a wooden one, leaning against a wall all year long,
ready to use to repair the tiles in August before the rains.
No angels climbed up
and no angels climbed down –
only men suffering from sciatica.

They prayed to catch a glimpse of Him
hoping to renegotiate their contracts
or to postpone their deadlines.

‘Lord, give me strength,’ they said
for they were descendants of Esau
and had to make do with the only blessing
left over from Jacob,
the blessing of the sword.


from Monday in Seven Days

5
Broken toys were my playthings:
zebras, wind-up Chinese dolls, ice-cream carts
given to me as New Year’s presents by my father.
But none was worth keeping whole.
They looked like cakes whose icing had been
licked off by a naughty child

until I broke them, cracked and probed their insides, the tiny
gears, the batteries,
not aware then that I was rehearsing
my understanding of freedom.
____

When I ﬁrst looked at a real painting
I took a few steps backward instinctively
on my heels
ﬁnding the precise place
where I could explore its depth.
It was different with people:
I built them up,
loved them, but stopped short of loving them fully.
None were as tall as the blue ceiling.
As in an unﬁnished house, there seemed to be a plastic sheet
above them instead of a roof
at the beginning of the rainy autumn of my understanding.

Lola is an angel. Her forehead hasn’t grown since she was eight,
her centre of gravity unchanged. And she likes edges, corners,
although she always ﬁnds herself
in the middle of the bus
where people rush toward the doors at either end.

My neighbours never went to school
nor have they heard of aesthetics
and hardly ever have they read anything
about the Earth’s axes, symmetry, or absolute truth.
But instinctively they let themselves drift toward the middle
like a man laying his head on a woman’s lap,
a woman who, with a pair of scissors
will make him more vulnerable than ever
before the day is done.

There is no prophecy, only memory.
What happens tomorrow
has happened a thousand years ago
the same way, to the same end –
and does my ancient memory
say that your false memory
is the history of the featherhearted bird
transformed into a crow atop a marble mountain?
The same woman will be there
on the path to reincarnation
her cage of black hair
her generous and bitter heart
like an amphora full of serpents.

There is no prophecy, things happen
as they have before –
death ﬁnds you in the same bed
lonely and without sorrow, shadowless
as trees wet with night.

There is no destiny, only laws of biology;
ﬁsh splash in water
pine trees breathe on mountains. 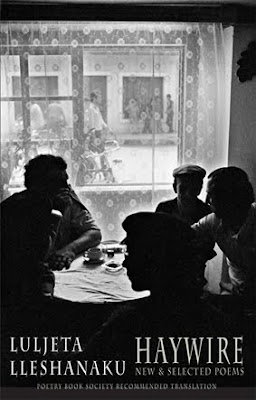 Review
Review by Sean O'Brien in The Guardian, 24 September 2011: 'The tyrant's insistence that there is no private realm has the unintended effect of making it necessary to write powerful and durable poems which suffer all the constraints imposed by confinement and yet have something ungovernable in reserve, namely their accuracy.' To read the full review, click on the Guardian link. 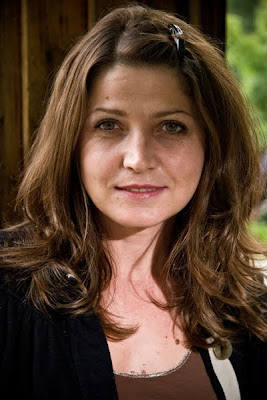 LULJETA LLESHANAKU belongs to the first “post-totalitarian” generation of Albanian poets. In Haywire she turns to the fallout of her country’s past and its relation to herself and her family. Through intense, powerful lyrics, she explores how these histories intertwine and influence her childhood memories and the retelling of her family’s stories. Sorrow, death, imprisonment, and desire are some of the themes that echo deeply in Lleshanaku’s hauntingly beautiful poems.

She was born in Elbasan, Albania in 1968. Under Enver Hoxha’s Stalinist dictatorship, she grew up under house arrest. Lleshanaku was not permitted to attend college or publish her poetry until the weakening and eventual collapse of the regime in the early 1990s. She later studied Albanian philology at the University of Tirana, and has worked as a schoolteacher, literary magazine editor and journalist. She won the prestigious International Kristal Vilenica Prize in 2009, and has had a teaching post at the University of Iowa and a fellowship from the Black Mountain Institute at the University of Nevada, Las Vegas. She has given readings in America, Europe and in Ireland at the Poetry Now Festival in Dún Laoghaire in 2010, and launches Haywire, her first British publication, at Aldeburgh Poetry Festival and and at London's South Bank Centre in November (full details above or via these links).

‘Luljeta Lleshanaku is a pioneer of Albanian poetry. She speaks with a completely original voice, her imagery and language always unexpected and innovative. Her poetry has little connection to poetic styles past or present in America, Europe, or the rest of the world. And, interestingly enough, it is not connected to anything in Albanian poetry either. We have in Lleshanaku a completely original poet’ – Peter Constantine.

‘Luljeta Lleshanaku’s poems take place in a melancholy landscape of mountain villages, chestnut trees, and collapsing futures where “spring kills solitude with its solitude” and the only emotional expression not considered a sign of weakness is impatience. The place of her poems is like a zero point that can only look out from itself in all directions at once. But the poet looks inward beyond paradox, and, instead of judgment, she finds recognition. In Lleshanaku’s work, geography and soul are charted on the same map. The rhythms of her new poems are expertly managed to enact vulnerability and withdrawal. Her lines stretch out and suddenly retract into fragments with the sensitivity of snail horns.’ – Forrest Gander, citation for the 2009 International Kristal Vilenica Prize.

‘These impressive poems carry a poignance much like the first buds of spring, a mark of survival and insistent life. In this bewildering human world such articulate determination proves again our common faith. Luljeta Lleshanaku speaks to us one and all’ – Robert Creeley.

‘When you close her book, the images don’t leave you. They cleave you open like a leopard’s paw, and enter into you. Once inside they create their own life, a second life, vastly different from the original. What more can we expect from real poetry, from true art?’ – Ridvan Dibra.
Posted by Editor Bloodaxe Books at 13:27