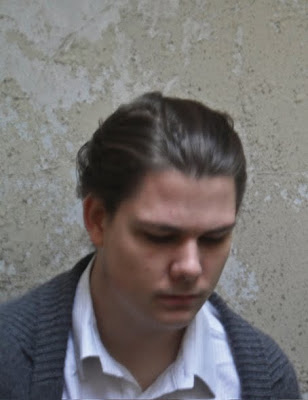 'Confer' is derived from the Latin 'conferre' which harbours three meanings: to compile, to bestow and to compare. Inevitably, as a first collection, 'to compile' is particularly resonant, encompassing as it does the peculiar practice of gathering together and ordering one's poems.

However, the meaning of the book's title as 'compare' is the most important to me. Lucian Freud once said that he wants "paint to work as flesh…to be of the people, not like them. Not having a look of the sitter, being them". Split between two cities — London and Paris — there is a sense in which many of these poems attempt embodiments of place that are best understood against the inevitable flux of the places themselves; a kind of parallax, for example, between Paris as one might actually experience it and Paris as it is (not as it has been experienced) in the poem.

There are also a fair amount of poems that allude to other literary and extra-literary sources. Eliot wrote that there are two types of allusion – extensive and intensive – and to the extent that I hope such allusions are extensive, the process of comparison (between the allusion and the alluded to) seems to me as much part of the poems as the words they contain.

Finally, 'confer' as a synonym for 'bestow' seems to most emphatically concern those poems in the book that shun normal punctuation and find their grammar in a kind of spacing dependent on uniform line lengths to bestow a common musical measure. This is a form I've worked in for a while (though one which I’m moving away from) and which attempts to offer a greater range of intonational and affective pauses in order to perform a forceful but complex music: the ideal of a fugue con fuoco, perhaps.

Ahren Warner's comment is reprinted from the PBS Bulletin (Autumn 2011) with the kind permission of the Poetry Book Society and the author. Each quarter the Poetry Book Society's judges select one Choice and four Recommendations (along with one or more Special Recommendations and a Recommended Translation). The five chosen or recommended poets are invited to write a comment on their collections for the PBS Bulletin – something of great interest to poetry readers since most published commentary on new poetry books is by reviewers not by the poets themselves. Ahren Warner's Confer, published by Bloodaxe Books in September, is a Poetry Book Society Recommendation for the autumn quarter.


About suffering they were never wrong, The Old Masters…

Though, when it comes to breasts, it’s a different story.
Cranach, for example, never seems to have progressed
beyond his pubescent attempts at apprenticeship:

tennis balls sewn to a pillow of hay, ﬁngers coming
to terms with the concept of foreplay. So too
with Titian, whose Venus bares handleless plungers

or the fruits of a template mocked up at Bellini’s.
For breasts, you want Rochegrosse, his Chevalier
surrounded by breasts real enough to have men

gripping their gallery plans discreetly; or Picabia
at his most garish: his naked, peroxidised blonde
stretching to coddle her slavering mutt. Her breasts

impress their tender weight upon us, and though
not as lofty as Pieter would have liked, she too
knows something of our weakness; that we fall

and are ﬂoored as much by the salt lure of skin.

The varieties of household paint proliferate;
Crown’s glosses, matts and silks spill over,
ﬁll the book I ﬁnd between Catullus

and Celan. Donaghy and Donne
ﬂank a Dulux brochure. And yes
I’m trying to show how well-read I am,

with which to strut the bounds
of personality. Contradiction in coherence
expresses the force of desire, apparently.

That note, in Buckley’s rendition
of Cohen, should exist

There is a point, somewhere,
around twenty seconds in

to a Seattle-birthed song
that embodies the word ‘abandon’.

acoustic to distortion;
the sublating of silence that occurs

in that bar of the Allegro
of that Bruch Konzertstück.

There was a girl at school who’d say
I’d end up a rock star or in prison.

I’m neither, have nothing,
but an art I’ve been learning

too long; a subject
I’ve studied beyond ﬂogged. 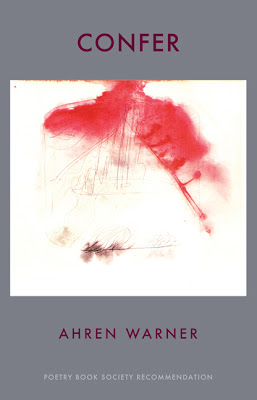 Confer is a book between two cities – London and Paris – with detours via rural and small-town England, drunkenness and death camps in Bavaria, the American absurd and the lost libraries of the Roman Empire. It contains love and lust poems, variations on Baudelaire and conversations with Nietzsche and Auden.

This impressive debut collection by a young poet already well-known for his innovative, highly musical poetry draws its energy from an interplay between melody and intellect. Ahren Warner’s poems seek to amplify the effect of our common experiences and to attenuate the everyday within a matrix of philosophy and art, language and its intervals.

‘In these poems, Mozart rubs shoulders with Hesiod, Cranach with Picabia, Nietzsche with Fitzgerald, Rodin with Rochegrosse. But what animates this first full collection is the constant and beguiling presence of the central character - arch-flâneur, would-be mauvais garçon, Lincolnshire small-town escapee, irreverent scholar - picking his way through these crowded streets, savouring his impressions of all that he encounters and inviting the reader to join him. Ahren Warner has almost invented a new kind of Fin de siècle’ – Annie Freud

‘Even before this first collection, Ahren Warner has become an influential poet, with his trademark tabulations and his unlikely mix of youthful humour and academic nous. Confer confers upon him the status of a central figure in a new generation of British poets’ – Roddy Lumsden

Ahren Warner was born in 1986, and grew up in Lincolnshire before moving to London. He has published his work widely in magazines and anthologies, including Identity Parade and Voice Recognition from Bloodaxe, and in Re:, a pamphlet from Donut Press. His first book-length collection, Confer (Bloodaxe Books, 2011), is a Poetry Book Society Recommendation, and was shortlisted for the Forward Prize for Best First Collection. He received an Eric Gregory Award in 2010 and is completing a PhD in philosophy and literature at the University of London. He divides his time between Paris and London.

Posted by Editor Bloodaxe Books at 15:13