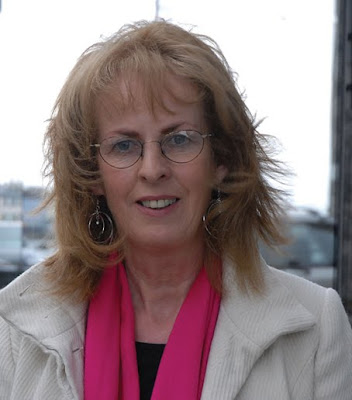 IRELAND IS CHANGING MOTHER is the latest collection from Rita Ann Higgins: provocative and heart-warming poems of high jinx, jittery grief and telling social comment by a gutsy, anarchic chronicler of the lives of the Irish dispossessed, before as well as since the demise of the Celtic tiger. (Author photo by Stan Shields)

Ireland Is Changing Mother is available from good bookshops in Britain and Ireland or online from Amazon via this link. 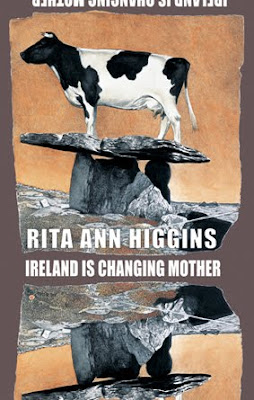 REVIEW OF IRELAND IS CHANGING MOTHER
'It shouldn't be unusual to hear a smart, sassy, unabashed, female working-class voice in Irish writing. But it is. Higgins's achievement doesn t depend on that rarity value, but it is certainly amplified by it. Higgins is, quite consciously, an artistic outsider... a unique fusion of wry, deadpan humour on the one side and absolute sincerity on the other. She doesn't congratulate herself for her sympathy with those who are (in this case literally) outside the world of art. She simply sees and writes. Her humour and playfulness keep sentimentality and self-righteousness resolutely at bay... She has made what is still the most direct and powerful statement of the class divide in Irish society... The boom years had no great effect on Higgins's voice, on her point of view or on her style. She had a manic linguistic energy long before the hysteria of the Tiger era quickened the pulse of the culture as a whole: Higgins could be regarded, in one of her guises, as Ireland's first rapper.... Her political satire hasn't lost its edge, but it no longer reads as a cry in the wilderness... Now the bubble's burst, we re left with our real treasures, and Rita Ann Higgins is one of them.' – Fintan O'Toole, writing in The Irish Times on Ireland Is Changing Mother
Click here to read the full review (this is only a small part of a full-length, in-depth review)
INTERVIEW WITH RITA ANN HIGGINS ON ARENA
Rita Ann Higgins talks to Sean Rocks on Arena on RTÉ Radio 1 on 23 September 2011, and reads poems from the book.
Click here to listen to the interview online.

REVIEW COMMENTS ON HER PREVIOUS BOOKS
‘Rita Ann Higgins writes a poetry in which anger is transformed into irony, social comment into wordplay. Hers is an unstoppable intelligence, which comes off the page in a swirl of humour, deprecation and observation’ – Fiona Sampson, Irish Times.
‘A brilliantly spiky, surreal blend of humour and social issues. Her poems are a witty mix of the erotic and the upfront political from a female perspective, with wonderful rhythms that effortlessly incorporate direct speech’ – Ruth Padel, Independent on Sunday.
‘A quite untameable poet. Higgins roams the provincial towns and countryside of Ireland fomenting rebellion and writing with unstaunchable energy of everything warm and unrespectable in Irish life. Her voice is like nobody else’s, simple but not naive, raucous but sympathetic’ – Peter Porter, PBS Bulletin.
‘Higgins’s voices are so distinctive and real that a whole world of semi-rural Irish poverty rises around the reader with the jolting acuity of an excellent documentary…an hilarious, absorbing and thoroughly disturbing experience’ – Kate Clanchy, Independent.
‘Rita Ann Higgins means a unique line in human warmth; and a unique colour of humour and a unique clarity’ – Paul Durcan.

Toxic and tired is the builder’s mess
in post-Celtic-tiger-Ireland.
Now that the bubble’s burst mother
the ghost-estates are everywhere.

The Olympic rats run in and out
of unﬁnished drainpipes,
up bare-stairs,
devouring lagging jackets
in hot presses that never had heat.

Someone high up in a department,
reeking with negative equity
calls all the ghost estates,
a phenomenon mother.

And what do the sons and daughters
of the Celtic tiger call them mother?

The ones who camped out in the ﬂoods
to get the semi with the decking,
and the snooker table lawn mother.
The ones who queued
with their deposits in their pockets,
their unborn children up their sleeves
their shaved backsides hanging out.
What do they call them mother?
They call them a travesty mother.

Don’t throw out the loaves
with the dishes mother.
It’s not the double-takes so much
it’s that they take you by the double.
And where have all the Nellys gone
and all the Missus Kellys gone?
You might have had
the cleanest step on your street
but so what mother,
Nowadays it’s not the step
but the mile that matters.

Meanwhile the Bally Bane Taliban
are battling it out over that football.
They will bring the local yokels
to a deeper meaning of over the barring it.
And then some scarring will occur –
as in cracked skull for your troubles.
They don’t just integrate, they limp-pa-grate,
your sons are shrinking mother.

Before this mother,
your sons were Gods of that powerful thing.
Gods of the apron string.
They could eat a horse and they often did,
with your help mother.
Even Tim who has a black belt in sleepwalking
and border lining couldn’t torch a cigarette,
much less the wet haystack of desire,
even he can see, Ireland is changing mother.
Listen to black belt Tim mother.

When they breeze onto the pitch
like some Namibian Gods
the local girls wet themselves.
They say in a hurry, O-Ma-God, O-Ma-God!

Not good for your sons mother,
who claim to have invented everything
from the earwig to the slíothar.
They were used to seizing Cynthia’s hips
looking into her eyes and saying
I’m Johnny come lately, love me.

Now the Namibian Gods and the Bally Bane Taliban
are bringing the local yokels
to their menacing senses,
and scoring more goals than Cú Chulainn.
Ireland is changing mother
tell yourself, tell your sons.

Rita Ann Higgins was born in 1955 in Galway, where she still lives. She left school at 14, and was in her late 20s when she started writing poetry. She has since published nine books of poetry, including Sunny Side Plucked (Poetry Book Society Recommendation) (1996), An Awful Racket (2001), Throw in the Vowels: New & Selected Poems (2005) and Ireland Is Changing Mother (2011) from Bloodaxe Books, and Hurting God: Part Essay, Part Rhyme (2010) from Salmon. Throw in the Vowels was reissued in 2010 with an audio CD of her reading her poems. Her plays include Face Licker Come Home (1991), God of the Hatch Man (1992), Colie Lally Doesn’t Live in a Bucket (1993), Down All the Roundabouts (1999), The Plastic Bag (2007) and The Empty Frame (2008). Her many awards include a Peadar O’Donnell Award in 1989 and several Arts Council bursaries. She is a member of Aosdána.
Posted by Editor Bloodaxe Books at 03:14