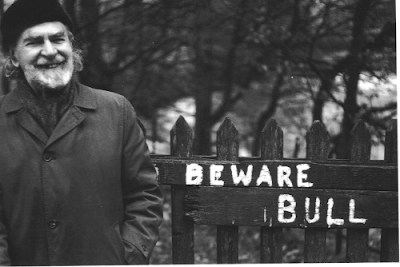 Basil Bunting beside the River Rawthey by Jonathan Williams (1980)

Basil Bunting was asked so many times for advice by young poets that he had a postcard printed with his key points:

I SUGGEST
1. Compose aloud; poetry is a sound.
2. Vary rhythm enough to stir the emotion you want but not so as to lose impetus.
3. Use spoken words and syntax.
4. Fear adjectives; they bleed nouns. Hate the passive.
5. Jettison ornament gaily but keep shape

Put your poem away till you forget it, then:
6. Cut out every word you dare.
7. Do it again a week later, and again.

Never explain - your reader is as smart as you.

Basil Bunting reads from Briggflatts
This video features four short extracts of Basil Bunting reading from his long poem Briggflatts (not in order), from Peter Bell's 1982 film portrait of Bunting, included on a DVD issued with the new Bloodaxe edition of Briggflatts (which also has a CD of an audio recording Bunting made of the whole of Briggflatts in 1967). Peter Bell’s superb film Basil Bunting: An introduction to the work of a poet was made by Northeast Films and first shown on Channel Four in 1982. The first two extracts here follow the sequence used in the film, not that of the poem itself (the second extract is the opening of the poem: 'Brag, sweet tenor bull...'). Most of the film was shot around (and in) Brigflatts meeting house near Sedbergh, Cumbria, and at Greystead Cottage in Northumberland’s Tarset valley, where Bunting lived from 1981 to 1984. The film is from the Arts Council England film collection, and is copyright Arts Council of Great Britain 1982. (Note: Briggflatts the poem has two gs, Brigflatts the place has one.) To order the new Bloodaxe edition of Briggflatts with free DVD and CD, click on this link to Amazon.co.uk 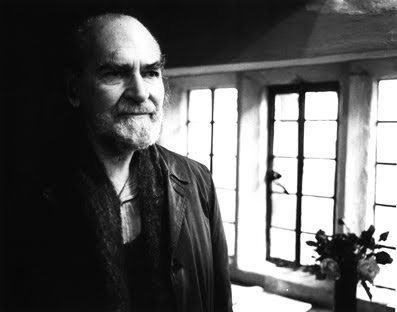 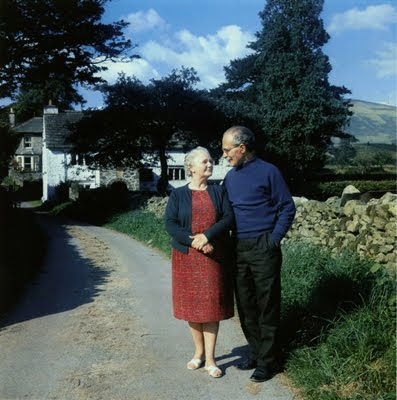 Basil Bunting reunited at Brigflatts with his childhood sweetheart Peggy Mullett (to whom Briggflatts is dedicated), after 50 years. Picture by Jonathan Williams.
Posted by Editor Bloodaxe Books at 06:59

(Always a dilemma when a part comes up on shuffle!)

The one thing I'll say about his advice... I agree with nearly all of it. But that "hate the passive"... it even looks like an afterthought. Here's all you need to know about the passive in English. Don't fall into the Bunting trap!