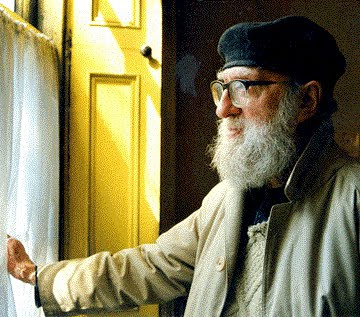 The Irish poet Pearse Hutchinson has died, aged 84. These two tributes are well worth reading: The Irish Times and Michael McLoughlin in the Irish Independent. His Collected Poems is published by the Gallery Press. The portrait above is by Michael O'Regan.

I remember being bowled over by a reading he gave in Strokestown a few years back. This is my favourite poem of his, "Flames", which I included in the Bloodaxe anthology Being Alive: the sequel to 'Staying Alive' in 2004.

A red setter leaping
constant up and down, up-and-down,
like a big, living flame
in a dark slum room
where an old poor woman lies in bed sick,
the heat cut off the light cut off,
her only light her only heat
the red-gold setter leaping
tireless up and down like a tall
sinuous brilliant almost healing flame.

A long skinnymalink with auburn hair
loose-limbed in his mid-thirties
immaculate in a flame-coloured suit,
leaping up and down, up-and-down,
like a loose-haired ﬂame
in a bar at the head of the Zeedijk
at one in the morning as Justin
played planxties on the penny-whistle.
Such Amsterdancing! He couldn’t get enough of it.
Vertical wavering, a grace, a flame.

Posted by Editor Bloodaxe Books at 03:26