Arundhathi Subramaniam’s poems explore various ambivalences – around human intimacy with its bottlenecks and surprises, life in a Third World megalopolis, myth, the politics of culture and gender, and the persistent trope of the existential journey. Neil Astley filmed her reading a selection of her work in Bombay in November 2011. Here she reads eight poems: 'Winter, Delhi, 1997', 'To the Welsh Critic Who Doesn't Find Me Identifiably Indian', 'Prayer', 'Home', 'Madras', 'I Live on a Road', 'Recycled' and 'Confession', all from Where I Live: New & Selected Poems (2009).


POEMS READ ON THE VIDEO:

My grandparents in January
on a garden swing
discuss old friends from Rangoon,
the parliamentary session, chrysanthemums,
an electricity bill.

In the shadows, I eavesdrop,
eighth grandchild, peripheral, half-forgotten,
enveloped carelessly
by the great winter shawl of their affection.

Our dissensions are ceremonial.
I growl obligingly
when he speaks of a Hindu nation,
he waves a dismissive hand
when I threaten romance with a Pakistani cricketer.

I ask for no more.
Irreplaceable, I belong here
like I never will again,
my credentials never in question,
my tertiary nook in a gnarled family tree
non-negotiable.

And we both know
they will never need me
as much as I, them.
The inequality is comforting.


To the Welsh Critic Who Doesn't Find Me Identifiably Indian

You believe you know me,
wide-eyed Eng Lit type
from a sun-scalded colony,
reading my Keats – or is it yours –
while my country detonates
on your television screen.

You imagine you’ve cracked
my deepest fantasy –
oh, to be in an Edwardian vicarage,
living out my dharma
with every sip of dandelion tea
and dreams of the weekend jumble sale…

You may have a point.
I know nothing about silly mid-offs,
I stammer through my Tamil,
and I long for a nirvana
that is hermetic,
odour-free,
bottled in Switzerland,
money-back-guaranteed.

Arbiter of identity,
remake me as you will.
Write me a new alphabet of danger,
a new patois to match
the Chola bronze of my skin.
Teach me how to come of age
in a literature you’ve bark-scratched
into scripture.
Smear my consonants
with cow-dung and turmeric and godhuli.
Pity me, sweating,
rancid, on the other side of the counter.
Stamp my papers,
lease me a new anxiety,
grant me a visa
to the country of my birth.
Teach me how to belong,
the way you do,
on every page of world history.

May things stay the way they are
in the simplest place you know.

May the shuttered windows
keep the air as cool as bottled jasmine.
May you never forget to listen
to the crumpled whisper of sheets
that mould themselves to your sleeping form.
May the pillows always be silvered
with cat-down and the muted percussion
of a lover’s breath.
May the murmur of the wall clock
continue to decree that your providence
run ten minutes slow.

May nothing be disturbed
in the simplest place you know
for it is here in the foetal hush
that blueprints dissolve
and poems begin,
and faith spreads like the hum of crickets,
faith in a time
when maps shall fade,
nostalgia cease
and the vigil end.

Give me a home
that isn’t mine,
where I can slip in and out of rooms
without a trace,
never worrying
about the plumbing,
the colour of the curtains,
the cacophony of books by the bedside.

A home that I can wear lightly,
where the rooms aren’t clogged
with yesterday’s conversations,
where the self doesn’t bloat
to ﬁll in the crevices.

A home, like this body,
so alien when I try to belong,
so hospitable
when I decide I’m just visiting.

I was neither born nor bred here.

But I know this city

of casuarina and tart mango slices,
gritty with salt and chilli
and the truant sands of the Marina,

my mother’s sari, hectic with moonlight,
still crackling with the voltage
of an M.D. Ramanathan concert,

the ﬂickering spice route of tamarind and onion
from Mylapore homes on summer evenings,

the vast opera of the Bay of Bengal,
ﬂambéed with sun,

and a language as intimate as the taste
of sarsaparilla pickle, the recipe lost,
the sour cadences as comforting
as home.

It’s no use.
Cities ratify
their connections with you
when you’re looking the other way,

annexing you
through summer holidays,
through osmotic memories
of your father’s glib
lie to a kindergarten teacher
(‘My mother is the fair one’),
and the taste of coffee one day in Lucca
suddenly awakening an old prescription –
Peabury, Plantation A
and ﬁfty grams of chicory
from the fragrant shop near the Kapaleeshwara temple.

City that creeps up on me
just when I’m about to afﬁrm
world citizenship.


I Live on a Road

I live on a road,
a long magic road,
full of beautiful people.

The women cultivate long mocha legs
and the men sculpt their torsos
right down to the designer curlicue
of hair under each arm.
The lure is the same:
to confront self with self
in this ancient city of mirrors
that can bloat you
into a centrespread,
dismantle you
into eyes, hair, teeth, butt,
shrink you
into a commercial break,
explode you
into 70 mm immortality.

But life on this road is about waiting –
about austerities at the gym
and the beauty parlour,
about prayer outside the shrines
of red-eyed producers,
about PG digs waiting to balloon
into penthouses,
auto rickshaws into Ferraris,
mice into chauffeurs.

Blessed by an epidemic
of desperate hope,
at any moment,
my road
might beanstalk
to heaven.

Driving through the Trossachs I see
the picture I drew as a ﬁve-year-old
in Bombay – a rectangle
with two square windows,
isosceles roof, smoking chimney,
and girl with yellow hair
standing in the driveway,
ﬂanked by two ﬂower pots.

And there is comfort in knowing
what we are so often told,
that fancy has wings
and dreams come true,
even if it takes years
for them to take root
in some corner
of a foreign land
that is forever India.


To take a homeopathic approach to the soul is to deal with
the darkness in ways that are in tune with the dark.
Thomas Moore

It’s taken time
to realise
no one survives.
Not even the ordinary.

Time to own up then
to blue throat
and gall bladder extraordinaire,

separation traumas
subcontinental
and griefs that dare
to be primordial.

Time to iron out
a face corrugated
by perennial hope,

time to shrug off
the harlotry
and admit
there’s nothing hygienic
about this darkness –
no potted palms,
no elevator music.

I erupt from pillars,
half-lion half-woman.

The ﬂoor space index I demand
is nothing short
of epic.

I still wait sometimes
for a ﬂicker of revelation
but for the most part
I’m unbribable.

When I open the coffee percolator
the roof ﬂies off. 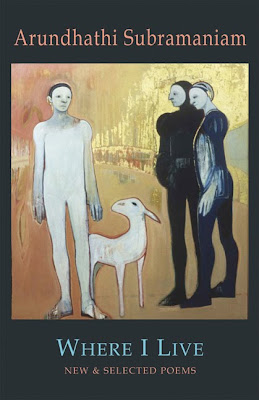 Where I Live: New & Selected Poems

Where I Live combines Arundhathi Subramaniam's first two Indian collections of poetry, On Cleaning Bookshelves and Where I Live, with a selection of new work. Her poems explore various ambivalences – around human intimacy with its bottlenecks and surprises, life in a Third World megalopolis, myth, the politics of culture and gender, and the persistent trope of the existential journey. They probe contradictory impulses: the desire for adventure and anchorage; expansion and containment; vulnerability and strength; freedom and belonging; withdrawal and engagement; an approach to language as exciting resource and desperate refuge.

Her new poems are a meditation on desire – in which the sensual and sacred mingle inextricably. There is a fascination with the skins that separate self from other, self from self, thing from no-thing. These are poems of dark need, of urgency, of desire as derailment, and derailment as possibility.

‘This is writing that creeps up on the reader quietly, sometimes with just the whisper of a sari, or the taste of a lullaby, and yet spins suddenly on the edge of stark recognition. Arundhathi Subramaniam’s is a strong new voice’ – Imtiaz Dharker.

‘Subramaniam’s poetry is one of illumination. She flashes a pencil-torchlight on a subject, and suddenly you feel you are the richer for it… Even more than precision, what defines her verse is its subtlety and the angle of vision from which she sees life’ – Keki Daruwalla.

Where I Live is available now from Amazon.co.uk by clicking on this link. 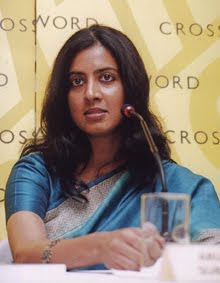 ARUNDHATHI SUBRAMANIAM lives in Bombay (a city she is perennially on the verge of leaving) where she works as writer, editor and curator. She has published two books of poetry in India with Allied Publishers, On Cleaning Bookshelves and Where I Live, and in Britain, Where I Live (Bloodaxe Books, 2009), which combines selections of work from her two Indian collections with new poems. She has also written The Book of Buddha (Penguin, 2005) and Sadhguru: More Than a Life (Penguin, 2010), co-edited Confronting Love (Penguin, 2005), an anthology of Indian love poems in English, and edited Pilgrim's India: An Anthology (Penguin, 2011). In 2006 she appeared at London’s Poetry International festival and gave readings throughout Britain on a tour organised by the Poetry Society.
Posted by Editor Bloodaxe Books at 15:15