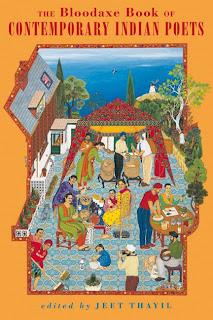 Review by Siddhartha Bose posted from The Wolf.

Recently, Aravind Adiga became the second Indian novelist in three years to win the Booker Prize. Amitav Ghosh, his older and more esteemed compatriot, also made the shortlist. Earlier this year, Midnight’s Children, the fantastical reimagining of post-Independence India and its most powerful and seething city, Bombay, was voted the best novel to have won the award in its forty-year history. These facts corroborate the extent to which the Indian-English novel—post-Salman Rushdie—is a visible entity in contemporary world literature. In contrast, the Indian poet writing in English occupies an uncertain, almost invisible space.

The Bloodaxe Book of Contemporary Indian Poetry, edited by one of the country’s finest living poets, Jeet Thayil, should be considered a significant event. It is an urgently contemporary and relevant book and deserves to rectify gaps in knowledge, especially in Britain, where Indian-English poetry rarely enters literary conversation. Bloodaxe should be commended for publishing some of the more interesting voices from Indian poetry in English, poets who view risk-taking in form and subject as a given.

In a striking passage from his long poem, ‘Missing Person’, the Bombay poet Adil Jussawala creates the persona of a poet condemned to obscurity, which is possibly representative of the Indian voice:

on the international back-slapping circuit

He’s for the dark.

The unnamed anti-hero of a poet, for whom ‘Exile’s a broken axle’, recalls Ralph Ellison’s invisible man. His voice is simultaneously rough and erudite, and he speaks from the underbelly of steamy, raw-nerved Bombay. It is a voice that reflects on its own insignificance and, in doing so, serves witness to an emerging and vital consciousness in contemporary poetry.

The most successful moments in Thayil’s anthology seek to give centre stage to such marginalised voices. In many ways, these voices represent the story of Indian-English poetry as a whole. Thayil wants this book to be ‘an introduction to an undeservedly little-known literature’. Many of the poems belonging to this literature inevitably address the modern, Indian identity as being perpetually hyphenated. Perhaps it is reductive to speak of a single identity in a country with over twenty official languages, English being only one of them. For example, one of the most popular Indian poets in America, Agha Shahid Ali, was a ‘Kashmiri-American’, to whom Thayil accurately refers as ‘a self-product of three cultures, Muslim, Hindu and Western, and a permanent “triple exile”’. The subject of Shahid Ali’s poetry is the trauma of history and the violence of cultural conquest, from colonialism to the dispute over Kashmir. Yet his language and idiom are reminiscent of the classical beauty of Urdu verse, as in ‘Farewell’:

In the lake the arms of temples and mosques are locked

in each other’s reflections.

Have you soaked saffron to pour on them when they are

I have stitched to your shadow?

In this country we step out with doors in our arms.

Shahid Ali’s experience of living in many cultures and languages, as well as in their necessary histories, allows him a vast, politically engaged contemporary vision. He died of brain cancer in America and is little known in the UK.

The plural and hybrid voices of postcolonial exile and migration often create the most arresting modes of expression. This postcolonial vision is fractured, multifocal, and mutating. Rushdie has spoken of the ‘double-perspective’ inherent to the Indian personne de lettres, which works through the epistemological frames provided by the ‘East’ and ‘West’. One of the aims of this anthology is to chart this ‘chutneyfied’ lineage of Indian poetry—the mongrelisation of English, American, and Indian languages and identities—which Thayil claims is as rich as prose written by Indians in English. He resurrects, for a new readership, great poets like Arun Kolatkar and Dom Moraes, accentuates the inventiveness of contemporary writers like Mukta Sambrani, Vivek Narayanan, and Mani Rao, while also introducing us to lost renegades like Gopal Honalgerre and Lawrence Bantleman.

In Britain, Thayil himself is virtually unknown, although his collection, English (Rattalapax, 2003) ranks as one of the key publications in recent Indian-American poetry. Hailing from Kerala, Bombay, New York, and Hong Kong, his new work experiments with ‘inverted structure over strict verse forms’, while chronicling the afterglow of heroin addiction. ‘The Heroin Sestina’, published in this anthology, juxtaposes formal mastery with a brutal honesty that is rare in contemporary poetry:

the pull of it: the skull rings time

so beautiful, so low

you barely hear it. Itch this blind toad taste.

When you said, ‘I mean it, we live like stones,’

you broke something in me only heroin

There is no affectation here, no problem of burdensome intertextual allusion. Even when the poet speaks to Baudelaire, remembering his ‘wolf’s heart’ as he wanders through Mexico City, the referencing is intimate, whisper-like, wise.

In contrast, for a poet as self-reflexively postmodern as Rukmini Bhaya Nair, the double perspective of postcolonial legacy is further complicated through negotiations with gender: ‘Considerthefemalebodyyourmost / Basictextanddontforgetitsslokas I / Whatpalmleafcandoforusitdoes / Therealgapsremainforwomentoclose I’ (from ‘Genderrole’). Here, the creation of identity locates itself within the interaction of ancient Hindu ritual and its slokas (prayers), spliced with reconstructions of post-structuralist philosophy. The compound words mirror the sound of Sanskrit invocation. For Mani Rao, the experience of gender is more visceral, where ‘Snakes run from burning skin’ (‘Untitled’). Mukta Sambrani, in her highly inventive Broomrider’s Book of the Dead, reflects on the nature of storytelling in a fashion reminiscent of the French nouveau roman:

Tell me the story of the swallowed plum pit or girl carried away to den of ants, silence for breaking. Break it. Was it a boy imprisoned by carpenter birds? Not woodpeckers. No. And was it a boy? Break. Who gets on the wrong train?

Jane Bhandari’s remarkable ‘Steel Blue’ bleeds Derek Jarman into words, through an alchemical seeing of the Bombay sea. ‘[U]nder rain-clouds was blued steel’ becomes ‘the navy of a raven’s wing’, and then morphs into spiderwebs that hold the memories of childhood. For the more conventionally minded reader, one notices the craftsmanship of Tishani Doshi, the mythmaking of Meena Alexander, and the humour of one of the presiding deities of the Bombay school, Eunice de Souza: ‘It pays to be a poet. / You don’t have to pay prostitutes’ (‘Poem for a Poet’).

Among the male poetry brigade, Srikanth Reddy’s play with form creates fascinating jigsaw puzzles, with ‘twilight in a box’ (‘Burial Practice’). In ‘Fundamentals of Esperanto’, Reddy reflects on the possibilities of meaning though language and also metaphor as translation:

I’m afraid I will never be lonely enough.

There’s a man from Quebec in my head.

A friend to the purple martins.

Purple martins are the Cadillac of swallows.

On the other hand, Sudesh Mishra’s poems, charting ‘dispersal by water’ in his native Fiji, work through an almost Williams-like directness and precision. The short poem below, ‘Suava; Skye’, whilst recalling ‘The Red Wheelbarrow’, inverts metaphor and makes the reader confront it headlong, while celebrating, concurrently, the beauty of the environment and the natural world:

mounted on an upended fork

inside a squat jar

Similarly, the aforementioned Honnalgere, who once exchanged letters with Robert Lowell and W. H. Auden, brings a ‘reckless originality of thought’ to his poetry, which he expresses with a simplicity that is unnerving and strange:

and waited for a reply

‘we have lost something else

In the poem ‘Theme’, Honnalgere defamiliarises the female body with a similar strangeness:

‘there is a possibility / of breasts / becoming a theme / with coconut hard shells’. Here the complexity of thought and achieved simplicity of language hark back to the Zen koan, or the Taoist parable. Another previously overlooked figure of this anthology, Lawrence Bantleman, works through an almost surrealist imperative. His images are startling: ‘I’ve eaten Fish and in the place / Of centre bone a bomb / Smiles with a cherub’s face.’ (‘Sepuagesima’). For Thayil, this poet’s descent into obscurity and alcoholism in Canada symbolises the neglect that surrounds the Indian poet.

Significantly, much of the editorial work for this anthology was done for a special issue of Fulcrum (Issue 4, 2005), arguably the most innovative and internationally minded of current American journals. Thayil has added sixteen poets to the original fifty-six, covering the spectrum of post-Independence poetry. The very concept of the ‘Indian’ poet is addressed and reconstructed. Many live as cultural exiles in places as diverse as New York, Berkeley, London, and Melbourne; others are resident in the varied cultural centres of India; some, like Daljit Nagra, have never lived in the country of their ancestors. Thayil makes a special case of the link between Indian and American poets, claiming that it ‘goes back to Tagore, whose first appearance in the West was in Poetry, at the behest of Ezra Pound.’ A significant number of the poets represented in the anthology have either studied, or presently teach at, American universities.

If there is a complaint to be made, then I would say that there are a few too many poets in this selection. My interest wanes when I read lines like ‘... I hear the flutter of light feet / on the warm earth’, or clichéd references to ‘holy India’. However, many of the more idiosyncratic and interesting poets were first published by a small press in Calcutta, Writers Workshop. Run by one of the foremost Sanskrit scholars of our time, Professor P. Lal, this press has also published first collections of internationally renowned poets like Philip Nikolayev.

I will end by turning to the quintessential Bombay poet, Arun Kolatkar. In Marathi, he radicalised the language, forming the avant-garde along with Dilip Chitre and Namdeo Dhashal. His first collection in English, Jejuri, won the Commonwealth Poetry Prize in 1976. In 2005, the New York Review Books Classics published a new edition of the book, which Rushdie called ‘one of the great treasures of modern Indian literature’. The poems in the Bloodaxe selection are from Kala Ghoda Poems, published in 2004, the year of Kolatkar’s death.

Kala Ghoda is a vibrant arts district of South Bombay, bringing together wealth and poverty, the cool and the seedy. At first, the speaker of the poem-cycle is a grotesque pie-dog—which resembles ‘a seventeenth-century map of Bombay / with its seven islands’—emblematic of the bastardised, hybrid nature of the city. The ‘city reconstructs itself’ through the dog’s vision. In a linked poem, ‘The Ogress’, the titular figure’s face is half ‘all scar tissue / and looks / more like a side of bacon’. She washes a boy, her shins ‘overrun by swirling / galaxies of backsliding foam / that collide, / form and re-form... / the curved space / of his slippery body, / black as wet slate’. An old fisherwoman eats her breakfast of bread and gravy, while a ‘motheaten kitten’ devours the shrimps she sells. The pie-dog can ‘almost taste her saliva’. Through humour, immaculate detail, and strange metaphor, the poet creates the megalopolis that, in turn, gives birth to the poems of its adopted sons and daughters.

Twenty-first–century Bombay is going through unprecedented growth and shocking urban displacement, a messy process that is reflected in the clamour of its buzzing art world, its film industry, and its media. It is fitting that Bloodaxe’s vital and important anthology of contemporary Indian poetry closes with the unique vision of one of Bombay’s master poets.

Posted by Editor Bloodaxe Books at 06:51