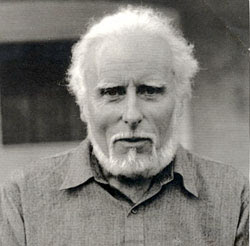 
Poetic greatness comes in a variety of forms and Jack Gilbert's is a quiet one. “I never wanted fame. I just wanted to be allowed to live my life,” he declares. And if the price of fame really is fame, Gilbert has successfully managed to avoid it. In an award-winning, Pulitzer-nominated career spanning more than forty years, Gilbert has published a scant four collections of poetry.

Transgressions, Gilbert's first UK release, is a selection of poems from his first four collections including the out of print Views of Jeopardy (1962) and Monolithos (1984), both of which are extremely rare and carry a high price on the used market. This, apart from the quality of the writing, makes Transgressions a must have for any fan of Gilbert's work. For UK readers, it will be a great introduction to one of the best American poets of the 20th Century. For US fans it gives a rare glimpse of Gilbert's early work, and as a whole, showcases his masterful use of an experiential tapestry into which he weaves allusions, as seen in the poem “Failing and Flying”:

Everyone forgets that Icarus also flew.
It's the same when love comes to an end,
or the marriage fails and people say
they knew it was a mistake, that everybody
said it would never work. That she was
old enough to know better. But anything
worth doing is worth doing badly.

As this excerpt only begins to show, this is the work of a man who loves life first and foremost. Gilbert reminds us that it is the doing of life that is truly important, as he works the mythological reference down into a more visceral image later in the poem:

Each afternoon I watched her coming back
through the hot stony field after swimming,
the sea light behind her and the huge sky
on the other side of that. Listened to her
while we ate lunch. How can they say
the marriage failed?...

Gilbert was born in Pittsburgh in 1925. It was a city hit hard by the depression era. He would have felt the domestic impact of WWII in his teen years. In his early adulthood, Gilbert would see his contemporaries spark the beat movement and give voice to the disillusionment of a generation, yet his work is never politically charged, never issue-driven. A pairing of the mythological and the personal is typical in Gilbert's work - he doesn't shy away from crafting poems that are bigger than his own experience, yet never sacrifices the everyday or particular in favour of the universal or surreal: an example that many poets could learn from.

John Freeman reported in the March/April 2005 issue of Poets & Writers magazine that Gilbert attended Jack Spicer's informal workshops in San Francisco during the mid 1950s where he and Allen Ginsberg had frequent disagreements about what poetry should and shouldn't do. One of the stories in the article tells us that Ginsberg once rode a bus across the bay and walked far into the woods of Sausalito to get Gilbert's opinion on the beginning of a new poem. Gilbert told Ginsberg, “Finally, this is really beautiful and wonderful stuff.” The poem would become ‘Howl’ the seminal icon of the Beat movement.

Gilbert would continue to meet his ideal of poetry by not branching out to an extreme of experimentalism that obscures meaning, but instead by working towards a new and subtle use of formal prosody that gives his poems their deceptive simplicity and plain-speaking power. He would remain obscure, however, until Views of Jeopardy won the Yale Younger Poets Prize and earned him a Guggenheim Fellowship. After this Gilbert promptly left the US, living abroad throughout Europe often in financial straights, but never poor. These places and the richness in his experience of them would become the texture from which Gilbert would work his poems of love, loss and beauty.

Grief is a common theme in Gilbert's work. However, he is always reminding us that not only is it in spite of suffering, but also because of suffering, that we must love life:

...To make injustice the only
measure of our attention is to praise the Devil.
If the locomotive of the Lord runs us down,
we should give thanks that the end had magnitude.
...
To hear the faint sound of oars in the silence as a rowboat
comes slowly out and then goes back is truly worth
all the years of sorrow that are to come.

("A Brief for the Defense")

When his poems are personal, they are uncommon love poems, tributes to those he has loved. It is as though, like a painter, Gilbert is preserving some small truth of these people and in achieving this he keeps memory close, as seen in the closing lines of “Measuring the Tyger”:

I want to go back to that time after Michiko's death
when I cried every day among the trees. To the real.
To the magnitude of pain, of being that much alive.

Gilbert’s rarely superfluous poems are much more than the sum of their lines, making it difficult to find choice excerpts without missing the sense of a poem as a whole. His are poems that ask to be read multiple times, each time leading to the discovery of additional nuance and the persistent demand that we must slow our pace to savour what it is to be living.


This review by R. Clark Morrow was published in The Wolf 14:
www.wolfmagazine.co.uk

Born in 1925, Jack Gilbert is a major figure in American poetry, but has always been a total outsider, defiantly unfashionable and publishing only four books in five decades. Initially associated with the Beats, he left America after winning the Yale Younger Poets Prize with Views of Jeopardy in 1962, eking out a living for many years on Greek islands. His second collection, Monolithos, appeared twenty years later in 1982, but he made his strongest impression on American readers with the late work published in his last two books, The Great Fires (1994) and Refusing Heaven (2005), winner of the prestigious National Book Critics Circle Award. Transgressions: Selected Poems (Bloodaxe Books, 2006) drew on all four of his US collections, and was his first UK publication. Two of the collections it draws upon, Views of Jeopardy and Monolithos are out of print in the US, but American readers can order copies of this British selection covering those collections from Amazon.co.uk.
Posted by Editor Bloodaxe Books at 04:28