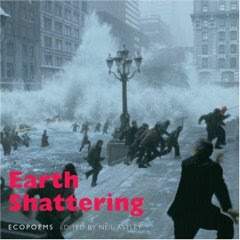 Any poetry anthology, in any field, inevitably owes something to those anthologies that have gone before it. But with Earth Shattering, Neil Astley has set out to do something rather different – not just moving us well beyond the canon of ‘nature poetry’ (which a number of other anthologies have also sought to do over the last few years), but by digging much deeper into the complexities of the historical relationship between humankind and the living Earth that sustains us, reflected in a highly contemporaneous and politically relevant way That will certainly appeal to environmental activists who will already be familiar with many of the poets featured in Earth Shattering. But they will discover a whole lot more than that in this astonishingly eclectic and wide-ranging anthology.

For one thing, Astley sets out systematically to fill some of the yawning gaps in our usual range, particularly regarding eco-poetry from the United States. For me, this was a real delight. Over-familiarity with the work of ‘old faithfuls’ such as Wendell Berry and Gary Snyder would appear to have rendered me deaf to poets such as Denise Levertov, Mary Oliver and W.S Merwin, let alone a whole slew of Native American poets including Linda Hogan and Joy Harjo who are such subtle, fresh voices, covering an extraordinary emotional range.

Perhaps not surprisingly, the dominant tone here and in the anthology as a whole is unavoidably elegiac, with many poems focussed on both historical and current loss of species, habitats, special places and ‘right relationships’. Cumulatively, the power of that indictment is overwhelming, the pain and anger intense. There are far fewer poems simply celebrating the beauty and mystery of the Earth and its teeming citizenry, even though the two sections that do focus more on this inspirational quality (The Great Web and Force of Nature) are amongst the strongest in the anthology, with excellent commentaries from the editor.

This has to be one of the great strengths of Earth Shattering. The work of each of the poets featured in the anthology is properly contextualised, the significance of their wider work briefly explained, and hugely helpful insights provided into motivation and, occasionally, interpretation. For the most part, Neil Astley relies on his own expertise in providing these ‘extended footnotes’, but I particularly enjoyed the way he draws on other writers (such as Jonathan Bate whose wonderful Song of the Earth Astley cites as his own most important influence) and other poets to provide additional insights. Sometimes he draws on the poet’s own commentaries of their underlying philosophy, especially when this has relevance to the collection as a whole. For example Mary Oliver’s reflection on her own poetic impulse (‘the man who does not know nature, who does not walk under the leaves as under his own roof, is partial and wounded. I say this even as wilderness shrinks beneath our unkindness and our indifference. We can come to our senses yet, and rescue the world, but we will never return it to anything like its original form’) clearly doubles up as a leitmotiv for many, many of the authors represented here.

In this whole area of reflection and commentary, Astley’s editorial touch seems very sound. There may be rather more questions both about the categorisation of contributors (with considerable overlap between different sections) and indeed the choice of contributors. This may sound churlish, but there were a surprisingly large number of poems that I just found very hard work as in producing almost zero reward for considerable time invested. And given that this is a substantial collection, I found myself towards the end either dipping in or tracking contributions from poets that had really caught my attention rather than crunching each and every individual item.

But there were so many completely new discoveries as to more than make up for the occasional ‘what the hell is that about?’. Perhaps it just reflects my own current mood (one of growing anger at the fact that what we are doing to the Earth today we are doing in full knowledge, with no conceivable excuse of ignorance or uncertainty as to consequence), but I was particularly struck by those poets who explicitly link environmental devastation to the ongoing oppression of communities and whole nations – Jayne Cortez writing about the Ogoni people in Nigeria, for instance, or Ernesto Cardenal reflecting on the impact of the Somoza regime in Nicaragua.

These are certainly some of the more polemical contributions, unapologetically setting out to stir anger and action – as Oodgeroo, the first published Aboriginal poet, puts it:

But time is running out,
And time is close at hand,
For the Dreamtime folk are massing
To defend their timeless land
Come gentle black man
Show your strength;
Time to take a stand.
Make the violent miner feel
Your violent
Love of land.

But the heart of Earth Shattering lies in one grand philosophical enquiry threaded throughout the collection: to what extent are we destined, as a species, to rediscover a proper sense of co-habitation, of deepest intimacy with the living world – or are we now locked into the role of alien presence, or hateful cancer, until the final reckoning? Theodore Roethke’s ‘Moss Gathering’ or Pattiann Rogers’s ‘The Laying on of Hands’ beautifully capture that essential conflict between our non-negotiable ‘naturalness’ and our problematic and habitually destructive separateness.

The enquiry remains open-ended – just! But as Neil Astley so eloquently reminds us, poetry has a special, possibly unique role to play in persuading us to confront such conflicts far more honestly than we are currently inclined to do:

As our world’s politicians and corporations orchestrate our headlong rush towards Eco-Armageddon, poetry may seem like a hopeless gesture. But Earth Shattering shows that the power of poetry is in the detail, in the force of each individual poem, in every poem’s effect on every reader. And anyone whose resolve is stirred will strengthen the collective call for change.